The two weeks when I was able to learn a lot

The 2-week life in State Brisbane of Queensland in Australia was very significant and valuable. I was able to learn a lot about agriculture and economy of Australia, about environment. After the long flight called eight hours, We moved to the University of Queensland (UQ) immediately and took a lecture on a theme of ” SUSTAINABLE ECONOMIES”. We took the English lecture for one week of the first half. There were a conversation session and the interchange with the student of UQ, and interest in Australia increased. This Field Study was homestay, and I did a problem of a house rule in Australia particularly the shortage of water in a thing of eyes, and, through life there, it was at an opportunity to think about the problem that each country held seriously. And there were many opportunities of the inspection and went to a winery, the ruins of the mine, an organic farm, Spring Brooke National park, JBS meat processing ground, the Coral watch. I was able to really learn most there how Australian food was exported, whether we faced nature for from now with what kind of consciousness, how Australian nature was protected. I thought that it was serious without being able to be familiar with the life in Australia, but a host family was kinder at all and contacted and was able to live a life in peace first. I appreciate that I guide the staffs of UQ carefully from beginning to end very much. Through this period, I think that the reflection points for the learning were found each. I think that you should have been able to make use of this experience in future student life for the cause. Two weeks in Australia were wonderful time to become the good memory for us. 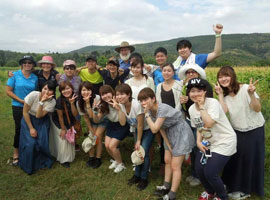