In the on-the-spot inspection, the Sirromet winery famous for Australia, the organic farm, the processing plant of beef, the research institute of flower arrangement, etc. were all interesting. Moreover, the field survey of the coral reef was also performed. Although investigated by having an examination method etc. taught in advance and our actually going into the sea, it was regrettable that many coral reefs cannot see under the influence of the weather the previous day. Since this most could not be studied, it was very substantial in Japan.

And it was divided into pairs and the life in Australia for about two weeks was passed by the homestay. Our host family was very able to enjoy ourself with it being making supper together every day or taking to the beach located in a Gold coast on a holiday. Since it was the environment where Japanese did not pass, it was uneasy, but when neither host Father nor Mother found us carefully, another language showed.
The final day moved to the Gold Coast, all together, had the barbecue at shopping and night and was enjoyed at them.

Although the life in Australia was very hard, if it is in Japan, it cannot experience easily — it is full of things and became what is very significant. It was a field study which can think I wants to go to Australia again. 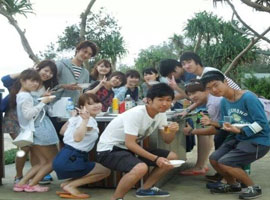