We went to Hawaii from the 4th September to the 17th September in the field study on 2 weeks. In this field study, we received lectures at the University of Hawaii, stamped out alien species that cannot be experienced in Japan, planted unique species, and toured solar panels, etc., we had very good two weeks. Also, this field study was good opportunity that I build my networks, because I spent people who I don’t speak too much.

In the lecture at the University of Hawaii, I could learn more about Hawaii’s environmental problems, Hawaiian marine creatures and renewable energy, received English lessons by native teachers and PowerPoint. I was anxiety because this lesson that native teachers taught us by PowerPoint. However, she was graduation from Meijigakuin University and a senior who attends the graduate school of the University of Hawaii, I can understand the content of the lecture even if I can’t understand English, I can understand about the environmental problems in Hawaii. In addition, I felt that I got aggressive because I should ask questions positively.

In outside activities, before we started planting activities, He taught us the name and the history of the endemic species. For example, in the old days there were stories that old people was making a surfboard using a tree of an endemic species called “Wheelie Wheelie”, a tree with a small amount of cotton called “Mao” which is endemic species of Hawaii, and a tree with cotton as an alien species It was such a story that old people coalesced and produced cotton enough to make clothes. Also, I felt very difficult and powerful work because Hawaii was hot temperature. I hope the trees we planted grow up vigorously and greatly.

In this field study, I was very worried because I could not speak English. However, I was talking by short words and I was teaching by friends who can speak English and I was trying to tell by oneself. As a result, I felt fulfillment and fulfilment when I could tell other people. In addition, I felt that I wanted to learn English more. I think that I want to give life to this field study in school life and future. It was really fulfilling two weeks. 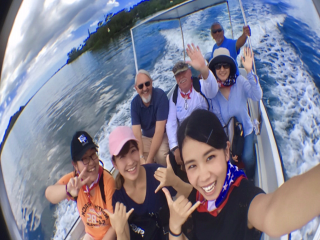