“What I studied in fieldstudy Hawaii” 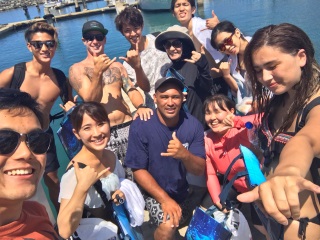 We saw a lot of things in field study in Hawaii. First 2days we had an English lesson in Hawaii University. Teacher was Mr.Paul and Mr.Ray. The English class was very practical and thank of that I could use it in Hawaii this time.

In Hawaii University we took several lecture about Hawaiian environment. “Property rights in fisheries” by John Lynham was the most impressional lecture for me. I saw a lot of news in TV and moviesnabout overfishing so I was very interested about it. In this lecture I learned about “catch share”. This is a system to control the amount of fishing according to countries.

We went to many places and saw a lot of things in Hawaii. Hanauma bay, Coconut island, Dolphin swim tour, Solar energy and Botanical garden. The Dolphin swim tour was very impressional for me. We went out to the offing and we jumped into the sea when staff says. I was at the head of the group so I could see a lot of dolphins. There was over 20 dolphins. Then we go back to the ship and move a little and saw turtles. In the sea was a huge rock with coral reef and there was 3 big turtles. I was surprised that we could see dolphings and turtles so close. We also could learn about the negative effect of sightseeing industry to the environment. I thought it is very important thing.

Through this Hawaii field study I could exchange with a lot of peoples and get motivation about language acquisition, see beautiful environment and culture I never seen in Japan, learn about environmental effect to the economic. I am really happy that I could join the field study in Hawaii.