I participated in field study at Australia and Queensland state from August 17 to August 30. I took the lesson by Queensland university including a home-stay at the site and visited in the various places with the theme of the Australian agriculture.

The water shortage and the agriculture at holds Queensland university, the lecturer’s presentation which are carnivorous stockbreeding and floral cultivation, etc. in a point of view was received. Time to talk about a hobby and the thing which is being learned was also set up about a mutual country in the local college student as well as the tuition about economy and the tuition, and it was also training of the language ability. It’s possible to buy lunch at the big cafeteria in the university and various fast food stores. It depends on a home-stay destination, but access to a university is well-informed by a ferry and a bus. 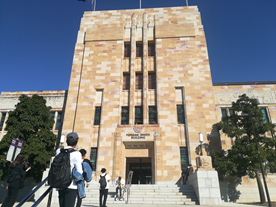 We went to a Merlot winery. I listened lecture about production technique of wine and did tasting there. It’s possible to taste red wine, white wine and dessert wine, and you can enjoy yourself while learning. There, as well as a factory, you can hold a wedding ceremony now, the business about a winery wedding was also very interesting.

We visited in a multinational company as JBS and learned about the first carnivorous processing. You did the process until the beef seen at a supermarket and a restaurant is delivered and presentation about the kind, how to bring up and processing method. It was that it’s rarely, so the chance an overseas company can visit was very valuable time. The local person was gentle with Australia, too, and it was also a safe place, and there was much nature, and it was very fun by first me to go to foreign countries, too. In addition to cash, if, when I have a credit card, I’m relieved. When going out, they’re used bus and train, but it’s charged to an IC card as a GO card and it’s used. You should not do Wi-Fi rental, a free Wi-Fi is flying to a town, and You can go to big shopping mall around here, and it’s possible to go to a tourist spot. `What shall I do on Sunday`, that you don’t need to think before a voyage, a family of your homestay and a student of Queensland university and teaches you, `you should go here well`. I went to the Gold Coast and a koala sanctuary. It’s possible to go to the downtown area as a queen street mall after weekday school of course.

Australia was winter, but the daytime is very warm, so even if it isn’t worn to there, it’s easy to have time. It’s from early morning and nightfall to night that it’s very cold. The field study from which culture of other country and a living habit as well as economics can be learned is a very short period while putting on the language ability but it’s only a very valuable experience. I think I go to the site and recommend the person who would like to learn communication ability and also take an excursion very much while learning the field in which I take my interest.